Gas sampling based on molecular flow in nano holes

Airborne pollution is one of the major causes of death, especially in metropolitan areas. A first step in the control of air pollution is the monitoring of air quality, in which the detection of Volatile Organic Compounds (VOCs) is one of the key parameters.

NanoTech Analysis has developed an advanced sampling method. The gas sampling uses openings in the order of 100- 300nm in a membrane to sample the air. The openings are controlled by a miniature valve that controls the sampling. The extremely small size of the openings guarantees a very small air flow into the vacuum of the mass spectrometer, while assuring that the air flow is independent of the molecular mass or diameter of the components of the air.

While the principle of the sampling is very elegant, the technological implementation of this sampling method is very challenging. The two main technological issues are:

The advanced fabrication technology for this air sampler uses e-beam or stepper patterning to create openings in the membrane and then reduces the size of the openings in a controlled fashion. Scanning Electron Beam and Focussed Ion Beam inspections have shown that openings in the range of 100-300nm could be reproducibly created.
The air flow through the opening can be closed off by a current-carrying beam, placed in a strong magnetic field, which moves driven by the Lorentz force. Two beams through which current can flow and the openings below the beams that appear as small dots. 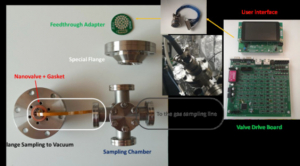 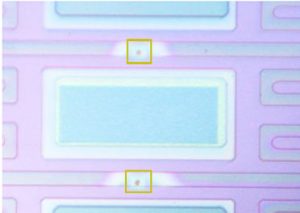 The die shown above is mounted on a vacuum flange as shown in the left-hand side, and is connected to electronics boards, shown on the right-hand side, for the actuation of the valves. The gas analysis systems thus realised has shown the feasibility of the sampling methods using small openings. The valves have, however, not demonstrated their ability to control the gas flow. 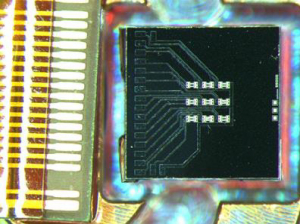 Based on the results of the FED4ASE program, NanoTech Analysis has been able to build strong partnerships with two important Italian medical research institutions for the launch of two different programs aimed at detecting markers and signatures of specific diseases.

The final scope is to realize an innovative scientific instrument able to join the compactness, mobility and high sensitivity resulting from the combination of nano and micro devices defined in the context of this program with more standard analytical techniques.

NanoTech is a startup company active in the detection of Volatile Organic Compounds (VOC) in the air and other gases.

‘As a result of the project, at least two customers have confirmed that they are now capable of carrying out in a simple, efficient, and cost-effective manner measurements at high sensitivity and at an optimum sampling rate.’
(R. Correale, NanoTech Analysis)